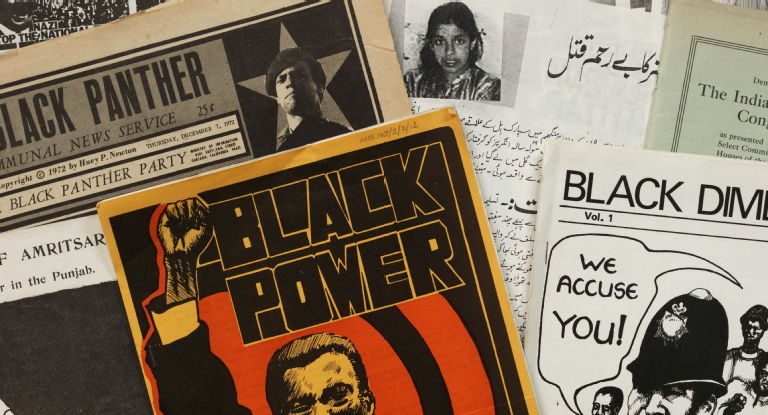 This term saw a collaboration between the Modern Records Centre and Warwick SU to produce an open series of educational events, including exhibitions, seminars and panel talks. Our first series is ‘After Talk Must Come Action: Racial Resistance and Remaking’ and has already seen 4 events this term…

The idea for the Open Education Series stemmed from discussions over Warwick Black History Month, organised by Maahwish Mirza, the SU Education Officer. Black History Month is dedicated to recognising and celebrating the contributions to Black history and culture, as well as debating the ongoing issues relating to race and opression.

This project saw a series of events including:

The MRC is home to the Minority Arts Archive, a fantastic collection holding material and photographs, which showcase art projects from minority communities. We also have a range of material on racial protests and movements. There was clearly potential to contribute to Black History Month 2015. This also offered an opportunity for us to promote our collections to the Warwick community, as many people would not be aware that we held primary source material relevant to their interests.

After meeting with Maahwish in December, we were inspired by the wide variety of material on race and resistance. Maahwish was also keen to promote and use the archives and we decided to launch Warwick Open Education Series, an umbrella under which all of our collaborative events can sit. Maahwish was already in the stages of hosting a panel talk on “Why is My Curriculum White?” so we created an additional 4 events to fit this theme; acts of resistance to racial oppression.

Here’s a list of our events so far for ‘After Talk Must Come Action: Racial Resistance and Remaking’:

PANEL: “Why is My Curriculum White?”

“Why Is My Curriculum White?” is a campaign at UCL produced by their Dismantling the Master’s House community of academics, staff and students. It investigates ideas of racial supremacy in curricula and intellectual cultures.

This event examined aspects of the immigrant experience in Britain through primary sources on the following themes: Housing and Education, Racism and violence, Refugees, Employment.

We had a short introductory lecture on immigration to Britain followed by a guided tour of the exhibition delivered by MRC Assistant Archivist Liz Wood and a post-tour discussion seminar.

SEMINAR: By Any Means Necessary? : Questioning Ideas of Militancy in the Civil Rights Struggle

This seminar made use of primary sources – including original Black Panther newsletters and pamphlets – to investigate notions of civil rights ‘militancy’, and examined the diversity of approaches utilised for the aim of civil liberties.

This seminar looked at three narratives of resistance to British rule in colonial India, using primary source material from the MRC’s archive collections.

With recent discussion on institutional discrimination and race-based miscarriages of justice erupting in America, this talk will look at the experiences of Black British communities.

The panel talks and introductory lectures of the events have been recorded for those unable to attend the event. The recording of ‘Why Is My Curriculum White?’ is live with more information on the Dismantling The Master’s House programme at UCL, as well as primary sources of interest available at the MRC. It can be found on the MRC website.

We have one final event left in this series; ‘No Justice, No Peace: Black British Communities‘. Our events are free and open to all. We hope to see you there.