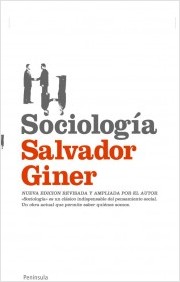 Sociology is a classic essential of social thought. A current work that allows you to know who we are.

Sociology, Salvador Giner, became soon -since its first appearance, in 1968 – in a treatise introductory internationally accepted as a classic. Reprinted and revised in successive editions, and translated to several languages, in which it has been frequently reprinted, Sociology is one of the reference texts for the basic knowledge of this social science, so fundamental to possess an objective view and quiet of the complex world in which we live. This invitation to the intelligence sociological perception of the human condition never neglects prompt us to think about it with the tools of a rigorous interpretation of the knowledge that it puts at our disposal. Sociology is a manual indispensable, not only for its conceptual rigor, but also for the originality of its approach. It combines a critical orientation towards society and its problems with a vast collection of information and data, always presented with extreme clarity. This latest edition brings together, expands and brings up to date the progress made by the inquiry and the theory of sociological as well as by the investigations unceasingly carried out: trátase of a discipline whose achievements and diagnoses must meet the responsible citizens of today.

Salvador Giner, after graduating in Law, he studied sociology in Cologne. Master and Phd in sociology and social theory at the University of Chicago. Post-graduate studies at Cambridge. Taught in English universities of Reading, Lancaster, and West London (Brunel), where he was Director of the Department of Sociology and Anthropology. He has been professor at the Universities of Rome, Puerto Rico, Mexico, Valencia (Venezuela) and the Sorbonne.

Salvador Giner is one of the most relevant sociologists and representative of the social philosophy and moral in Spain. In addition to his many empirical studies macrosociológicos , is the author of authoritative works on the dynamics of the civil societies, democracy, citizenship and the evolution of ethics, many translated into several languages. Among which stands out this same treaty, his two books on the history of sociological theory, the Dictionary of Sociology, Mass Society , and its recent Origin of the Moral.