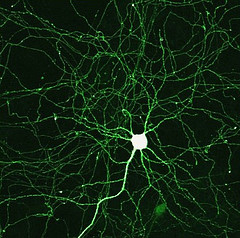 The discussion about the effects that new technologies might be causing in our brains is a hot topic in recent years. There seems to be agreement on what are those effects, nor on whether they could be beneficial or particular: recall, for example, the reactions are passionate, both in favor and against, that has been awakened in the work Surface, by Nicholas Carr. The controversy is important, given the pervasiveness of the new technologies in our lives.

In this scenario, the researchers, Denise Manahan-Vaughan and Anne Kemp have made an important discovery: a study, published in the journal Cerebral Cortex, shows that the vision of two-dimensional images of an environment causes the same changes in the neuronal connections that the active investigation of that environment.

The researchers knew that this variation in the communication between the neurons produced in the hippocampus of rats exploring an environment, but could not determine if the changes were influenced by the movement of the animals or by the learning of the characteristics of the environment. And to do this they devised a test clever:

Rats were exposed to a few small screens on which were projected images on the spatial context, so that the active exploration of the environment was unnecessary. The measurement of the activity of the hippocampal neurons showed that long-term depression was also produced under these conditions: that is to say, it was giving in the brain of the rats with a passive learning.

The experiment could not go from being a scientific curiosity, were it not for the implications that Manahan-Vaughan believes to find in our relationship with new technologies-more specifically, for the learning in the school mediated by computer. As I said at the beginning, there are authors who argue, as Carr, that exposure to new technologies makes us more superficial: more incapable of continuous attention and deep thought. According to Manahan-Vaughan, their results indicate that mammals are also able to learn by exploring the environment in a passive way that viewing information in a passive manner on a screen. Thus:

Television or computer games after school may compete with the information learned in school.

Can that yes. Or it may not. As Kirsten says Winkler in his blog post, Disrupt Education, although the effects on neurons of the hippocampus are the same, in reality we would not know, attending only to these effects, what they would be learning students. We will have to wait, then, to see if Manahan-Vaughan is right.